Below, we have compiled relevant information on the most important hormonal disorders:
Thyroid Dysfunction, Hyperprolactinemia, PCOS, Corpus Luteum Defect

Hypothyroidism is found in 10-20% of patients wishing to have children (even in men!). Manifest hypothyroidism can severely disturb the follicular maturation process and contribute to a corpus luteum defect. In recent years, latent hypothyroidism, which is characterised by elevated TSH levels and normal free thyroid hormone levels, has been treated using medication. However, it is now clear that the strict medication regimen of previous years is not always necessary. Depending on your initial situation and possible problems, we will discuss a possible course of medication with you individually. 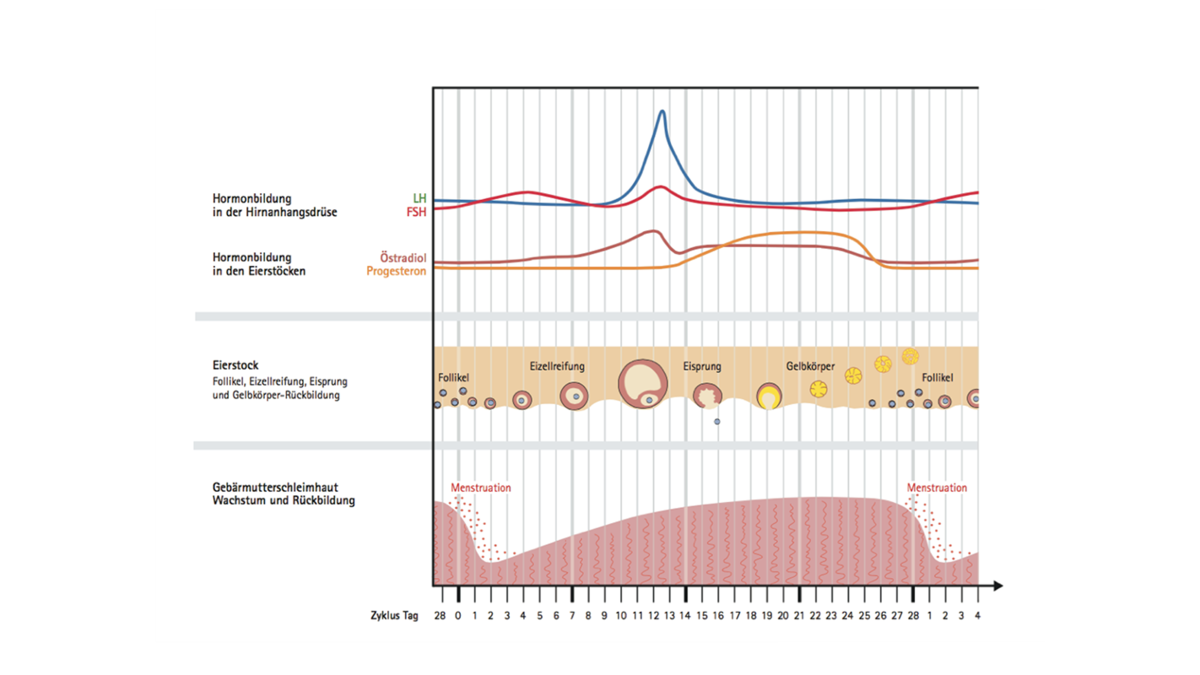 Hyperthyroidism can on the one hand also have a negative effect on the menstrual cycle. On the other hand, if pregnancy does occur, it can result in child development problems. This type of disorder should therefore be treated in cooperation with an internal medicine endocrinological specialist, if possible always before falling pregnant.

There can be various reasons why the pituitary gland is producing too much prolactin. A gynaecological examination before the blood sample is taken, stress, or the use of certain types of medications can be a cause.  In the case of very high prolactin levels, a hypophyseal tumour should be ruled out using a CT or MRI,even though these tumours are usually benign adenomas,. Occasionally, even with no evidence of a tumour, an overproduction of cells in the pituitary gland can occur outside of the control of normal hormonal mechanisms. These types of benign changes should be monitored and treated with medication. This will enable menstruation and ovulation to return to normal. In rare cases, thyroid function disorder can have the secondary effect of causing hyperprolactinemia, which can be treated by bringing the thyroid levels under control.

PCOS is a disease that results in cyclic disorders, absence of ovulation, hyperandrogenism (signs of increased androgen levels without evidence found of increased androgens in the blood). A further criterion is the ultrasound confirmation of many small follicles on the ovaries. There are numerous causes: Thin women often have a genetic predisposition to PCOS, but PCOS can also be the result of chronic overeating and obesity.
If PCOS is coupled with reduced glucose tolerance (also insulin resistance), then this can cause the pancreas to pump large amounts of insulin into the bloodstream, where it can have adverse effects on different regions of the body (brain, ovaries, liver).

Therapy: The use of “insulin sensitizers” (Metformin) for several months can be attempted to help correct the menstrual cycle. Frequently, women with PCOS weigh more which, in turn, allows the cyclical disorder to persist. In fatty tissue oestrogen is used to produce androgen (male hormone) which, together with insulin, inhibits cyclical processes. It is therefore advisable to reduce body weight (diet, exercise) in addition to taking  Metformin.

The overproduction of male hormones, hyperandrogenaemia, can also affect the sensitive hormonal interaction of the female menstrual cycle. Male hormones are produced at several locations in the female body: if there is a metabolic defect in the region of the adrenal glands, then this can be treated with cortisone. A very common cause of hyperandrogenaemia (increased peripheral effects of normal androgen levels, such as hair growth in areas uncommon for women, acne) is increased body weight. In fatty tissue, oestrogen is used to produce androgen (male hormone) which, together with insulin, inhibits cyclical processes. It is therefore advisable to reduce body weight (diet, exercise) in addition to taking Metformin
This is often coupled with PCOS (Polycystic Ovary Syndrome) which can intensify the symptoms. This causes the increased production of male hormones, especially in the ovaries.

Therapy: In the case of adrenal cortex disorders, the administration of cortisone can be used as a targeted attempt to reduce androgen levels. However, in most cases, ovarian stimulation using Clomifene or Letrozole tablets (off-label!) is necessary to trigger ovulation. Occasionally, a change of therapy to FSH injections may be necessary. In especially persistent cases, a procedure known as ovarian drilling to reduce androgen-producing cells in the ovarian surface via laparoscopy can offer an alternative.

After ovulation, through the processes of vascularisation and depositing of fat, the follicle becomes what is known as the corpus luteum. The diagnosis of a corpus luteum defect is difficult. The determination of hormone levels can vary greatly depending on the time of day and stage of the menstrual cycle. It appears that the normal duration of the second half of the cycle and cyclical stability – characterised by the absence of spotting during the cycles and premenstrual spotting – is more important than the absolute progesterone levels.
However, if a corpus luteum defect is suspected, then the approach should focus on the root of the problem. If the quality of the first half of the cycle is reduced, then this will have a negative effect on the post-ovulation cycle – known as the luteal phase.

Therapy: Egg cell maturation stimulation and administration of luteal hormones in the second half of the menstrual cycle.