Until what age can you have children?

Women in industrialised countries are leaving having children until  much later in life. In Germany in 1970, women were 24 years old on average when their first child was born, now they are at least 30 years old.

Many people see family planning from a relaxed perspective because 40% of all men and women mistakenly believe that falling pregnant only becomes difficult for women after the age of 40 (2007 survey from the Allensbacher Institute). Fertility actually begins to wane after 30 years of age because the number of egg cells constantly falls – as does their quality!
A fertility reserve allows for more flexible family planning. 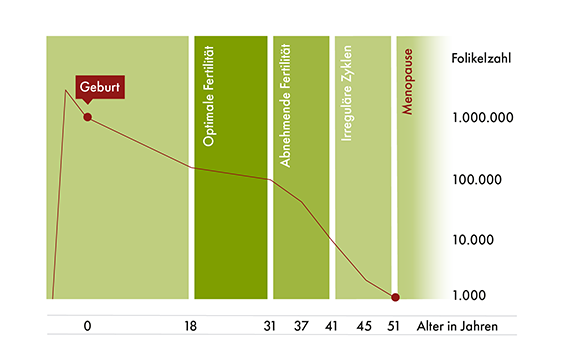 How can you fulfil your desire to have children? 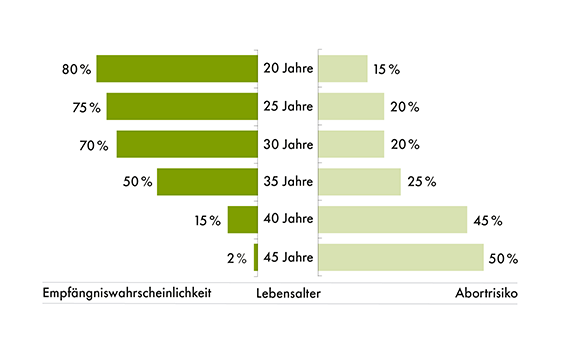 The creation of your own fertility reserve enables you to choose to have children later in life. The freezing of egg cells, ideally before 35 years of age, means you can preserve your chances of falling pregnant even 5-10 years later. Your chances of falling pregnant during each cycle are generally as high as when the egg cells were originally frozen. This is commonly referred to as “social freezing” because it is not a disease-related measure, for example a fertility reserve created as the result of cancer. The modern freezing method, known as egg vitrification, allows your egg cells to retain their quality for many years.

Thousands of children born from previously frozen cells (egg cells, sperm cells, embryos, testicular tissue) attest to the safety of the procedure and success of the method. It is recommended to freeze at least 20 to 30 egg cells in order to have a good chance of falling pregnant later.

If you are planning to start a family later, even years later, you will first have the option of falling pregnant naturally (until early/mid-40s) but without being under pressure to succeed, then if you are unable to fall pregnant, the frozen eggs cells can be defrosted and fertilised using the sperm of your partner as part of IVF/ICSI treatment. Embryonic transfer then makes the pregnancy possible.

If a woman chooses not to start a family while she is young for personal reasons, and wishes to freeze her egg cells, despite not suffering from any type of illness, this is known as “social freezing”.

No medical therapy is completely risk-free. But modern medicine has more than 50 years of experience in hormonal stimulation of the ovaries. Nowadays, when carried out by specialists, the application of this type of therapy is rarely problematic. We are happy to provide you with more information on possible therapeutic options as part of a comprehensive consultation. When medication is used responsibly, the dreaded overstimulation of the ovaries is almost non-existent in the modern medical field (1% of all stimulations).

Unfortunately, the costs are not (yet) covered by health insurance providers. You must expect to pay around €2,500 per cycle not including medication-related costs. In the best case, the medication will cost approx. €500. Additionally, you will be charged €300 per year storage costs. On average, between 2 and 4 stimulation cycles are necessary to collect 20 to 30 egg cells.